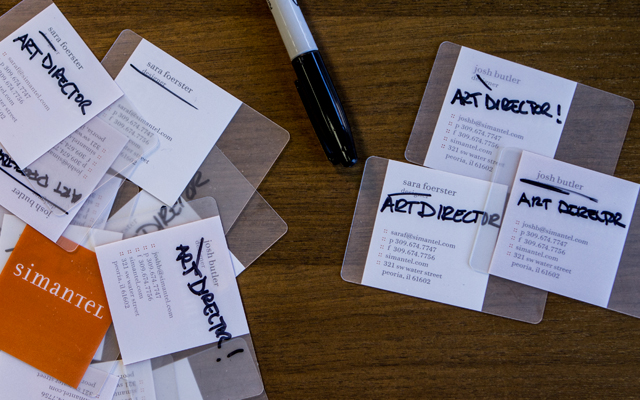 Two talented creatives, Sara (Foerster) Ingles and Josh Butler, have graduated to the status of art director which is no easy feat at Simantel. Just take it from our executive creative director, Maggie:

“We ask a lot out of our designers. We challenge them everyday to learn new skills, push their capabilities and get comfortable being uncomfortable.”

Josh and Sara have proven time and time again that they’re up for any task. We’re excited to see where this step in their career takes them.

“I have a lot of respect for each of them — they’re fearless and have winning attitudes,” said Maggie.

Join us in congratulating Sara and Josh on this achievement.

Sara joined the Simantel team as an intern in 2010 and is one of our few employees who can boast having worked with everyone on staff at one point or another. Before Simantel, Sara worked at the Peoria Alzheimer’s Association as an in-house designer. She created fundraising materials, informational collateral and special event pieces for the annual Memory Walk.

For Sara, coming to work means a new challenge. She says that she is excited by the revolving projects she works on, from shooting photos on location to working on websites and logos.

Sara claims to be a 90-year-old woman at heart, citing her love of knitting, crocheting and ceramics. Don’t expect to find her crafting all day though. When not producing stellar work for Simantel, Sara stays busy teaching typography at Bradley. 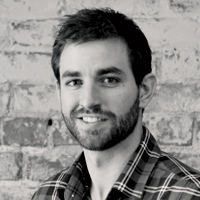 Josh also became a Simantelite in 2010, when he was hired on as a designer. He was instantly a huge asset to the agency and even had previous Caterpillar experience before joining our ranks.

In addition to dozens of groups within Cat, Josh has delivered for many of our other clients, including Ameren, First Response Team of America and AFB International. He continues to hone his skills while tackling diverse projects that range from branding, print and interactive design to storyboarding and art directing on photo/video shoots.

Outside the office, Josh enjoys reading, writing and watching movies — both classic and contemporary — from around the world. When not at the cinema, he may be found lacing up his hockey skates at the local ice rink or, weather permitting, swinging a racquet on the tennis courts.

Josh’s drink of choice is a gin and tonic.